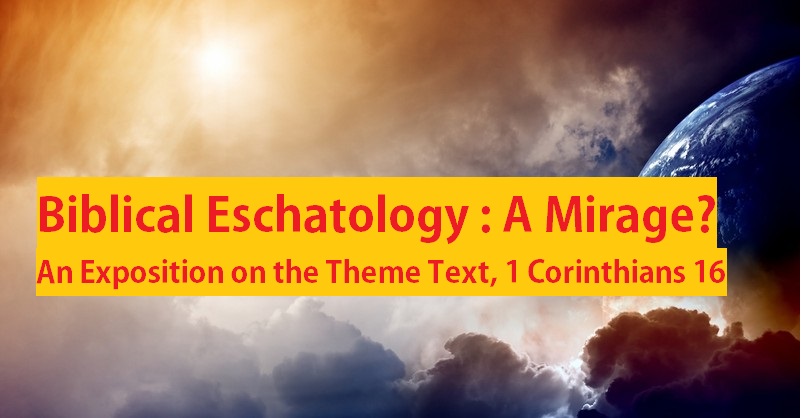 I hereby express my heartfelt gratitude to the Visioner and leader of this unique mentoring ministry, our dear Mother, Mama Jacintha Olusoga, a Woman of God, Mother in Israel, devoted Evangelist, a great investor in heavenly service, former Registrar of Lagos State University, member of the Board of Trustees of West Africa Theological Seminary, Ipaja, Lagos, for inviting me to deliver this lecture. Rarely have I seen a woman of God in our church that is so committed to the cause of the Gospel in the way our dear mother has been. In the Lagos environment, she is in the class of two of our elderly mothers, Evangelist Funke Familoni and Evangelist Odunaya who are in their eighties and are still in the field of evangelism.

The major prophecies by the Lord Jesus Christ about the signs of the End Time can be found in Mathew chapter 24 and Mark chapter 13. The following are described as signs of the coming Christ. They are preparatory to and warning of the nearness of the end.

St. Paul also warned about the end time generation and their tendencies: “This know also, that in the last days perilous times shall come. 2For men shall be lovers of their own selves, covetous, boasters, proud, blasphemers, disobedient to parents, unthankful, unholy, 3Without natural affection, trucebreakers, false accusers, incontinent, fierce, despisers of those that are good, 4Traitors, heady, highminded, lovers of pleasures more than lovers of God; 5Having a form of godliness, but denying the power thereof: from such turn away. 6For of this sort are they which creep into houses and lead captive silly women laden with sins, led away with divers lusts, 7Ever learning, and never able to come to the knowledge of the truth. 8Now as Jannes and Jambres withstood Moses, so do these also resist the truth: men of corrupt minds, reprobate concerning the faith. 9 But they shall proceed no further: for their folly shall be manifest unto all men, as theirs also was. (2 Timothy 3:1-9).

The Fulfilment
The events of the present age show that the eschatological prophesies are being fulfilled. Almost all the signs have witnessed accurate fulfillment in all respects.

Our scope of discourse at this conference is eschatology, not the apocalypse. The latter deals with events that will occur in the new age to come, the rapture, tribulation, and judgment of all men before the white throne, eternity in heaven or Hell, and general life in the hereafter. We limit ourselves to eschatology.

Is End Time a Mirage?

Why Eschatology is not a Mirage